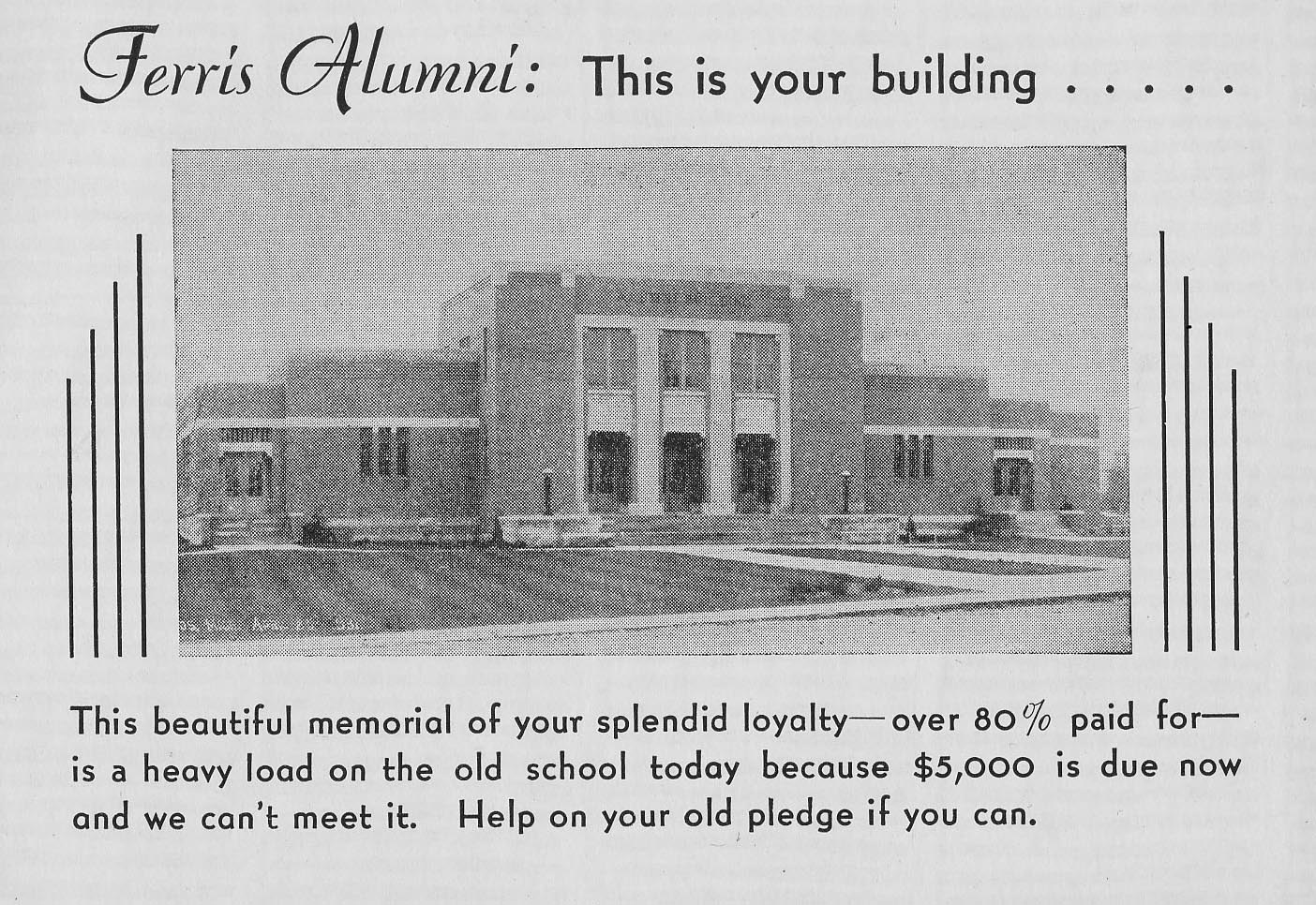 The University Archives and Records Management Reading Room is located in Alumni 101, in the heart of the oldest building on campus. Because of the unique materials and the program mandate to preserve those materials, there are special rules concerning use that do not apply to the general library collection.

Historical Overview of the City of Big Rapids, by Dr. Richard Santer 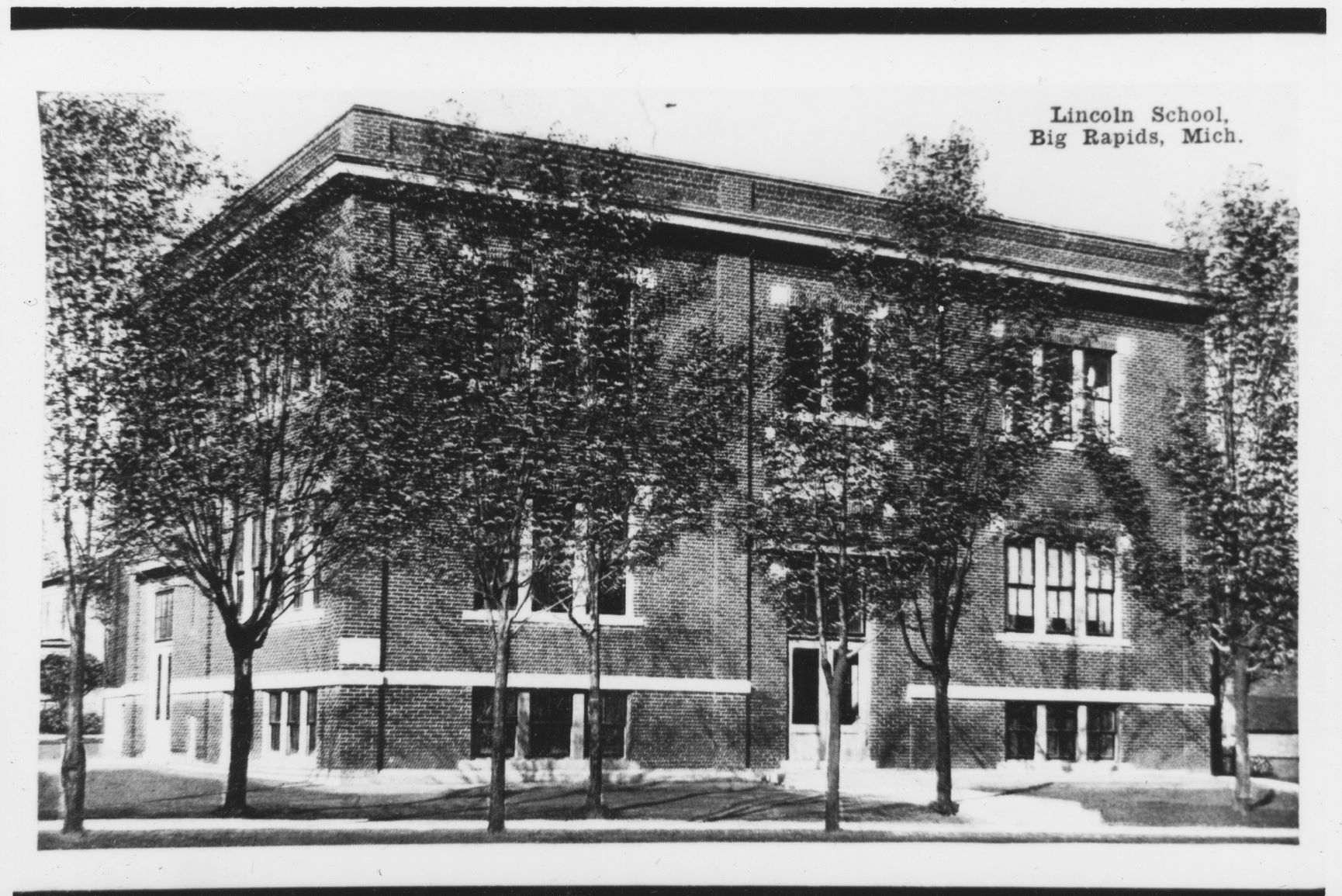 Undated photo of the Lincoln School which is currently the Big Rapids Public Library.

The contemporary attractive natural landscape setting for Big Rapids can be traced to the most recent Ice Age melt-off of the Saginaw and Michigan glacial lobes about 13,000 years ago. Their retreat provided the City’s undulating hill terrain, the upland terminal moraine vistas to the east and west, plus the intervening economically important flat outwash plain of the mighty Muskegon River on which is located so many important land use activities such as the airport, Central Business District, industries, general hospital, elementary, and high schools.

It is scientifically speculated that the earliest humans came through the area about 11,000 BC based on the dating of relics found north and south of here. In historic times it was the Anishnabeg -- "original" or "first" people of the Three Fire Ojibway/Chippewa, Potawatomi and Ottawa tribal groups with which the successive European French-British-American fur traders (especially for beaver pelts) maintained economic contact between the mid-1600’s to mid-1800’s. Most active here were the Ottawa (variant spelling) who regularly camped each early spring near the Muskegon’s big rapids to tap the sap of the abundant maple tree for syrup and sugar. Although most of the pre-permanent settlement features have been lost, a few sites with their relics it is surmised, lie below the surface guarded by a few inches of soil and reestablished vegetation.

The early history of Big Rapids was associated with the logging industry in the Lower Peninsula. The Muskegon River, whose headwaters come from Houghton Lake, was used as a transportation artery moving logs downstream to the mills located in Muskegon. Swift currents near the City’s present location were referred to by early lumbermen as "the big rapids" and was adopted as the name of the City. The year 1855 is considered to be the year that permanent settlement of Big Rapids began with construction of homes and the establishment of families. During the first few years the community, including the surrounding township, was known as "Leonard", the postal address for the area.

In 1859 the first recorded plat created in Big Rapids was named the Village of Big Rapids plat by Mr. Warren and Mr. Ives. The City never was a legally incorporated village, however, and up until 1869, when the City of Big Rapids incorporated, affairs of government were conducted by Township Officials. The village of Big Rapids plat comprised about 100 acres of land located south of Maple Street. The second plat created in Big Rapids was originally named the Village of Glen Elm plat and included the present North State Street area. The Glen Elm plat was recorded in 1860 by Margaret and Zerah French, and eventually become known as French’s Addition to Big Rapids. Most of the present-day downtown thus lies between the two early "villages".

The post Civil War years witnessed the arrival of many Scandinavian and German people, the construction of new wooden homes and stores as growth occurred in response to the continued logging of the pine forests. Three railroad companies began operations during the growth of the lumbering era, each with a round house to expedite their operations. The expansion of the City prompted citizen action towards the adoption of a City form of government. A resolution was introduced in the State Legislature and passed in April 1869, and the City Council met for the first time on April 22, 1869.

In May 1884, Woodbridge Nathan Ferris arrived in Big Rapids and prepared to organize a school which opened in September of 1884 with an enrollment of 15. The student body steadily grew and by 1906, enrollment reached 2,000 with students ranging from 14 to 65 years of age. The school suffered through several severe slumps in enrollment during World War I, the Depression, and World War II. In 1950 Ferris Institute suffered a major blow when a fire destroyed its main buildings. Ferris Institute managed to survive the setbacks and is now a major state university offering a wide variety of academic and trade courses and serves a growing global student body. Mr. Ferris went on to become Governor of Michigan in 1912 and a U.S. Senator in 1922. Today Ferris State University is the leading employer in the Big Rapids area.

During the early part of the twentieth century, construction of two dams provided electricity to the area and people began to describe Big Rapids as Water Power City. The two concrete dams were built to harness the hydro-electric power of the Muskegon River, one located at Rogers Heights (1906) and the other in Big Rapids (1914). The availability of energy enabled the City to diversify its economic base to produce a variety of manufactured products. The dam in the City was eventually removed in 1966, but the Rogers Heights dam continues to produce hydro-electric power for customers of Consumers Power Company.

Mercy Hospital, opened in 1879 by the Sisters of Mercy, was the first hospital in Big Rapids. After a third major fire, the Sisters of Mercy were unable to recover from the financial losses, and the history of Mercy Hospital in Big Rapids came to an end in 1919. The Community Hospital opened its doors in 1927 with 10 private rooms and 7 doctors. The hospital was part of the City administration until 1975 when it became Mecosta County General Hospital, and came under the jurisdiction of Mecosta County. Today Mecosta County General Hospital has 74 beds with approximately 25 doctors on active staff, and is the second largest employer in the area.

In spite of the City growing smaller in area since the 1930’s, during the 20th Century the citizens of the Big Rapids community have established a record as an early adopter of progressive ideas such as the City Commission / City Manager form of administration(1914), school district consolidation (1950 & 1965), income tax vs. property tax (1965) and the creation of many parks during the post-Vietnam war era. 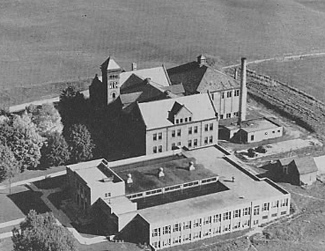 You Know You're From Big Rapids When.....

This Facebook group allows users to post photos of their past and current events in Big Rapids, Michigan.  This is an open group, available to all Facebook users.